Ticha is an online, digital explorer for a corpus of Colonial Zapotec texts. (The name ticha comes from the Colonial Valley Zapotec word for 'word', which can also mean 'language' and 'text'.) Zapotec languages are indigenous to Mexico. There is a large corpus of alphabetic texts written in Zapotec languages, the earliest dated to 1565 (Oudijk 2008:230). Reading and interpreting these colonial documents can be extremely difficult because of the challenges of early Zapotec orthography, vocabulary, grammar, and printing conventions, yet the documents contain rich linguistic, historical, and anthropological information.

Ticha allows users to access and explore many interlinked layers of these texts, including images of the original documents, transcriptions, translations into English and modern Spanish, linguistic analysis (including morphological interlinearization), and commentary. Ticha is innovative in bringing together data analzed in FLEx (Fieldworks Language Explorer) a system for lexical and grammatical analysis, with current TEI standards (Text Encoding Initiative) for paleographic and translational representations of texts. Ticha seeks to make this corpus of Colonial Zapotec texts accessible to scholars in diverse fields (including linguistics, anthropology, and history), Zapotec community members, and the general public. 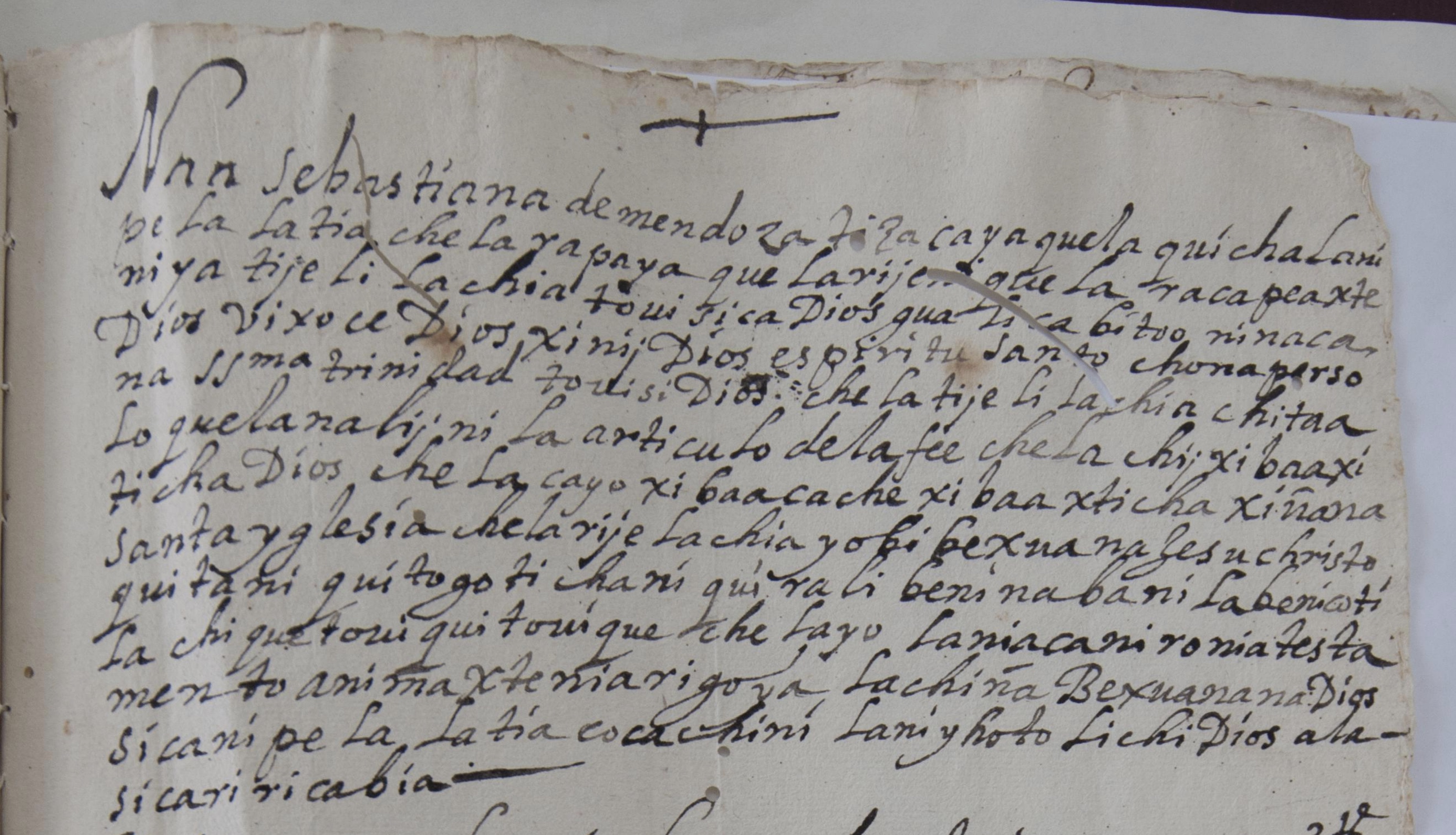 In this ACLS-funded project, we explore questions of collaboration in digital scholarship and the intersection of collaborative digital scholarship with community-engaged research. This project leverages an existing project, Ticha, and propels it forward through the creation of publicly available English and Spanish language teaching modules that will be targeted for use in high school and college level courses in both the US and Mexico. This work will be done with an interdisciplinary team including the PI (a linguist), Zapotec activists and scholars, digital scholarship experts, and undergraduate students. The community-engaged methods employed will not only be a means by which a particular digital scholarship project achieves advancement, but will also be objects of study and reflection themselves.

Ticha, a digital text explorer for Colonial Zapotec (https://ticha.haverford.edu), is a digital scholarship project that allows users to access and explore many interlinked layers of texts from a corpus of texts written in the Zapotec language during the Mexican Colonial period. Users can navigate images of the original documents, transcriptions, translations, and linguistic analysis. Ticha seeks to make this corpus of Colonial Zapotec texts accessible to scholars in diverse fields, Zapotec community members, and the general public.

Zapotec is an indigenous language spoken in Oaxaca, Mexico and by diaspora communities in Mexico and the United States, especially California. There is a long history of alphabetic writing in Zapotec language and this corpus of texts are a rich and underutilized resource on Zapotec language, history, culture, and personal heritage. Since 2013, the Ticha Project has been engaged with research on and dissemination of this corpus through the creation and growth of a digital platform for exploring these texts, and in person workshops that both utilize and further annotate these texts in a circular creation of knowledge. The Ticha project is committed to: (i) maintaining a project that is sustainable and innovative; (ii) creating work that engages Zapotec voices at all stages; (iii) ensuring that the archive of colonial texts repeatedly, and in its very design, points to the Zapotec community; and (iv) playing an active role in the larger community of digital scholarship, learning from and providing a model for others interested in community-engaged digital scholarship.

Professor Brook Lillehaugen on the Ticha Project from Haverford College Libraries on Vimeo.

Carolyn Anderson, Swarthmore Class of 2014 on the Ticha Project on Vimeo.

Janet Chávez Santiago on the Educational Value of Ticha from Haverford College Libraries on Vimeo.

May Plumb on the Ticha Project from Haverford College Libraries on Vimeo.

Michel R. Oudijk on the Ticha Project from Haverford College Libraries on Vimeo.

George Aaron Broadwell on the Ticha Project from Haverford College Libraries on Vimeo. 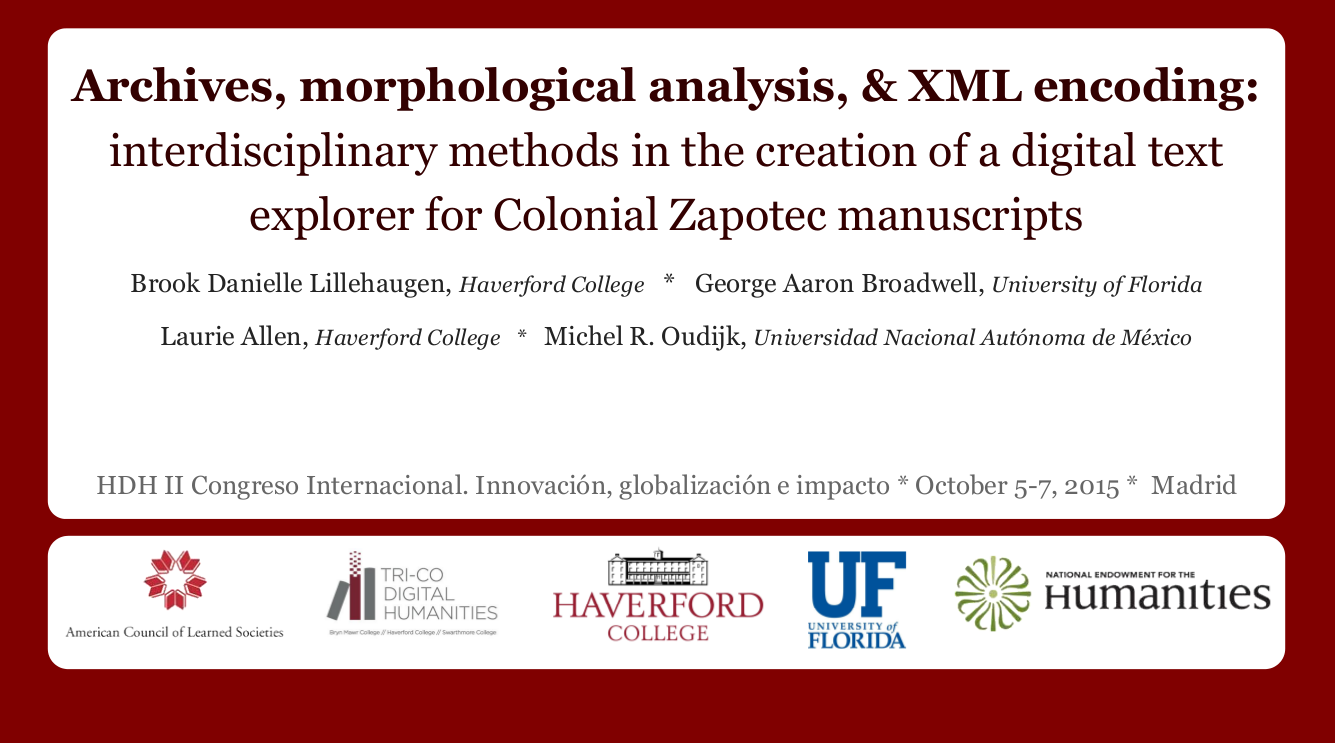 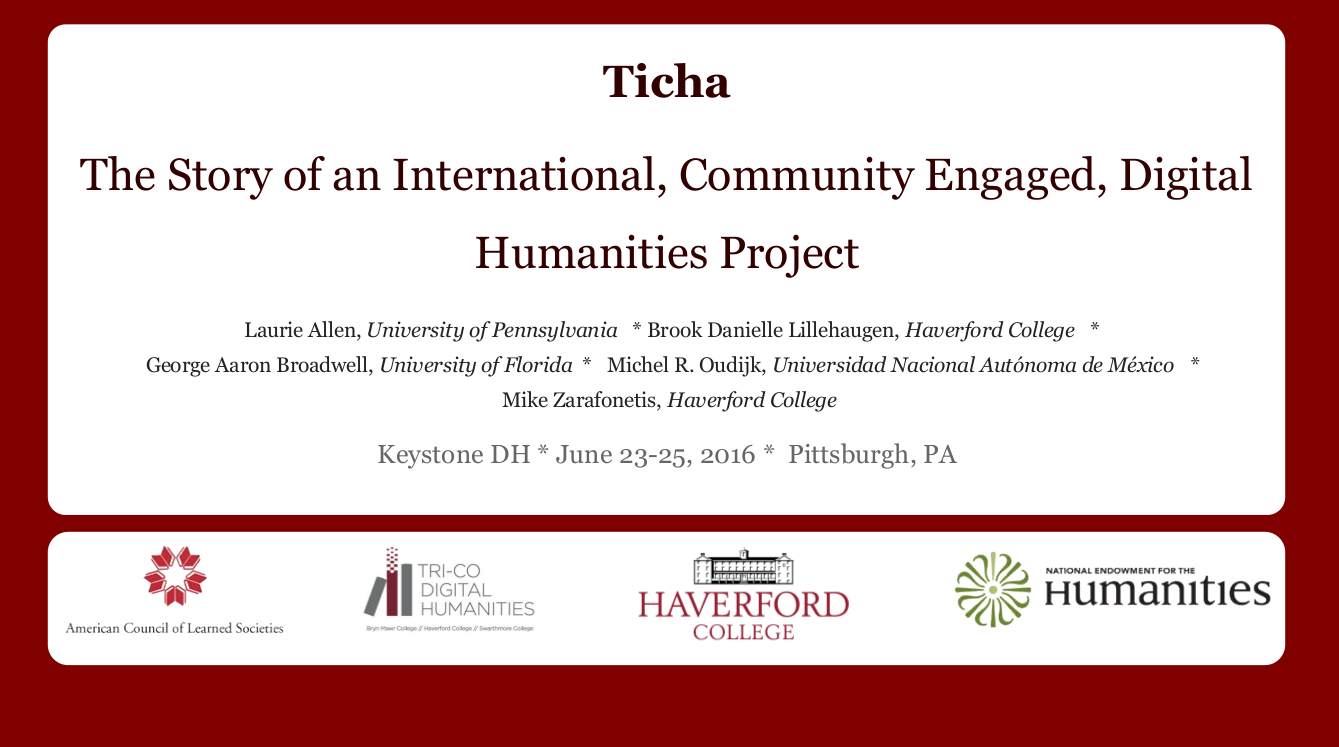 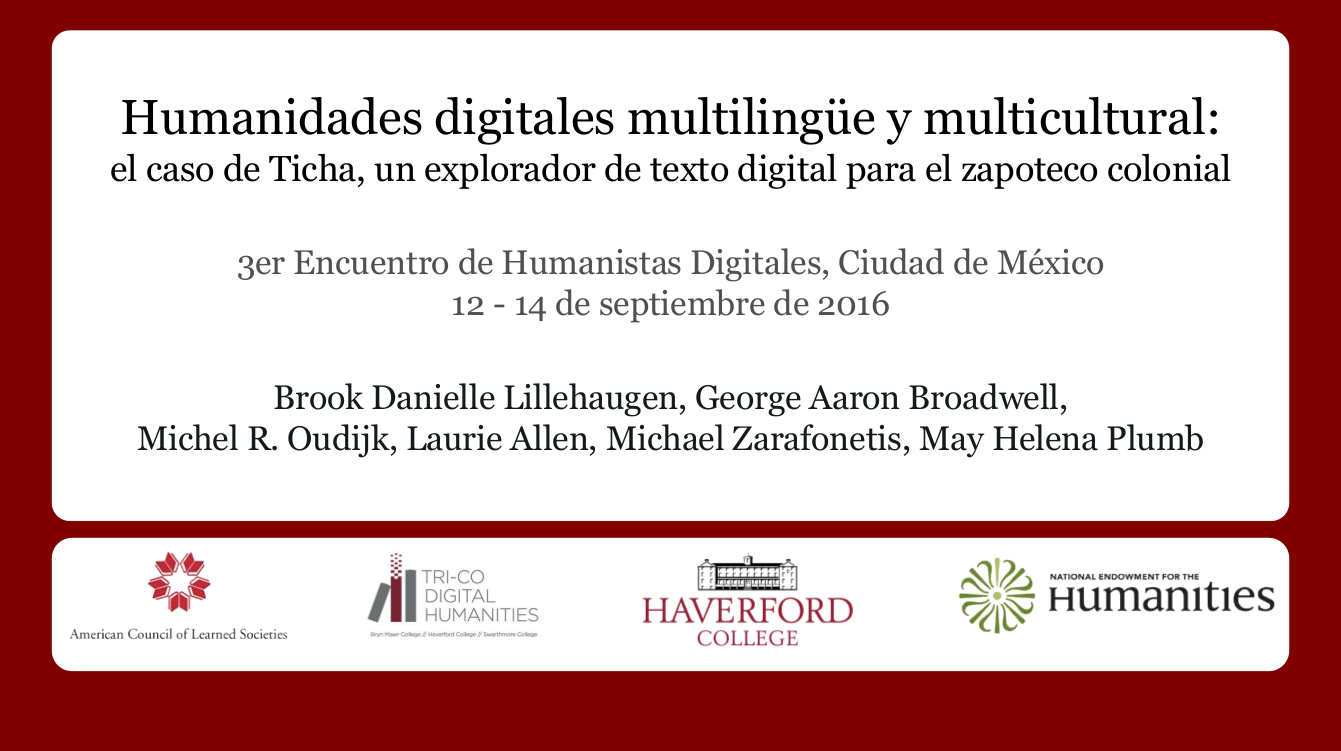