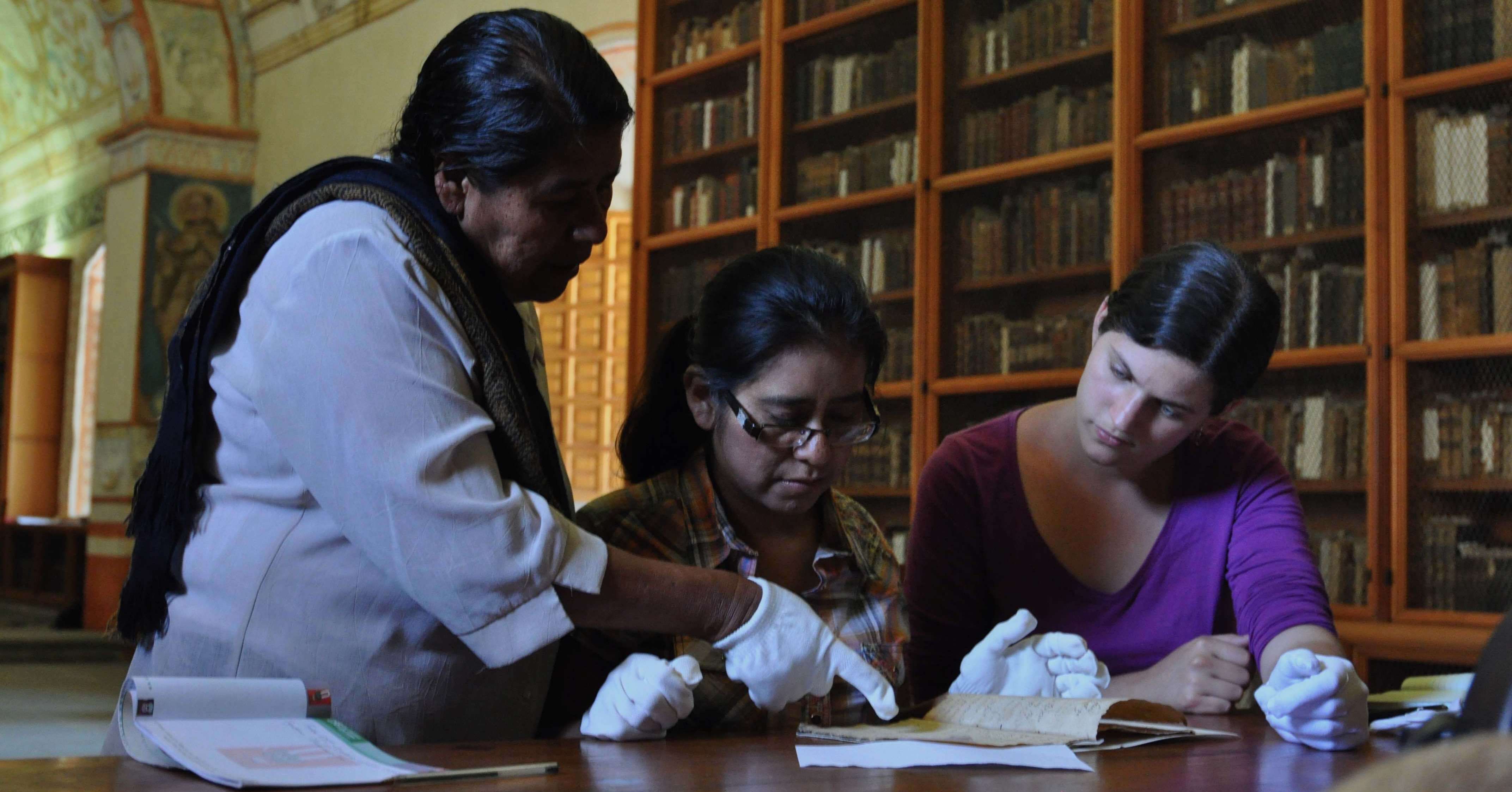 Only a few weeks ago, I began my position at Haverford College as a Postdoctoral Scholar in Community Engaged Digital Scholarship, funded by an ACLS Digital Extension Grant. Starting this year of dedicated work on this project, I reflect on my long journey to help preserve my language. As a Zapotec speaker and writer, I actively try to maintain my community knowledge through my language. In 1992, as I started to realize that many migrants from my pueblo in Los Angeles were not passing on our language to our young generation, I sought out the help from linguists at UCLA to try to write my language.  This effort became crystalized with an orthographic system of my Zapotec variation, San Lucas Quiaviní, and in 1999 we published a trilingual Zapotec-English-Spanish dictionary (Munro and Lopez, et al. 1999).

Now, over 20 years later, I am still learning about my language, Zapotec words, and all the knowledge and history they hold. Unable to travel to Oaxaca for in-person workshops, we recently began online “Conversatorios”, a series of Zoom meetings for Zapotec activists to talk and discuss Colonial Zapotec documents. One Conversatorio is facilitated by Dr. Xóchitl Flores-Marcial (you can read her blog post here) and the other one by me. You can see some of the Conversatorio participants in Figure 1: Sandra Gonzalez and Rogelio Hernandez from Matatlán, Juan Prospero (also Aurora Gomez who is not visible) from San Bartolomé Quialana, Moisés García Guzmán, from San Jerónimo Tlacochahuaya (and also a Ticha Advisory Board Member), Mabel Iris and Leonardo (not shown) from Diaz Ordaz, and finally Noel Alejandro Santiago (not shown) from Teotitlán del Valle. Here we are going over the first lesson that was focused on colonial Zapotec documents.

Figure 1. The Conversatorio in action

The Conversatorio that I facilitate consists of 8 people including myself (all listed above), from six different pueblos in the Valley of Tlacolula. All of them have been active in the promotion of their Zapotec language for years. Even though we all speak Tlacolula Valley Zapotec, in each town we speak a different variety; that is what really enriches our languages.  Through these Conversatorios not only do we learn from one another, but also we learn new words, or find words in the Colonial documents that have changed in meaning over the last centuries.

For example, the word coconi that we saw in a 1614 document sparked a discussion. One of the team members recognized it as being cuni in his variation, and all of us agreed that it was indeed that word. This word was used to refer to a “virgin” in Colonial times, but no longer can be used that way. Moreover, the meaning of the modern word seems to vary a bit from pueblo to pueblo. In Tlacochahuaya, Matatlán, and Teotitlán, this word is used to refer to a young chicken or female turkey that has never laid any eggs. Interestingly, Rogelio Hernandez from Matatlán, mentioned that some people in his community pronounce the word as cucuni, which seems to be closer to the Colonial Zapotec word. In Quialana, Diaz Ordaz, and Quiaviní, we only use this in the word budycuny, which refers to a female turkey. I thought that in Quiaviní it could refer to any female turkey, young or not. However, encouraged by this discussion, I asked a member of my family back home about this word and she told me that it is used to refer only to young female turkeys “who haven’t met a boy yet”. Moisés García Guzmán reflects on this conversation in a tweet, shown Figure 2.  (Click on the link to see the whole thread—his tweet sparked further discussion online!)

Going over the documents and talking about the Colonial Zapotec words not only reminds us of certain words that we use today, but also jogs our memories about other words that have been lost in our pueblos.  For instance, Rogelio Hernandez also mentioned that in his pueblo Santiago Matatlán, there exists a word dad qui to refer to the head or ruler of a town. This word is made up of two parts, the first part dad means ‘father’ and the second part qui means ‘head’.  However, this word is known to only a few people, as all the pueblos in the Valley of Tlacolula now use the Spanish borrowing pristen instead.

Through the Conversatorio I have also found some ways to confirm words that I had hear from my grandparents. As a child, my maternal grandmother used to count in Zapotec and some of the words stuck in my mind and I had asked many older folks about them.  For instance, I remember two words she used: gayon for 60 and ta for 80.  But when I asked other folks about these words, some of them would say they had never heard of the word or they were not sure. As I became involved with the Ticha Project, I have been able to confirm these words, which we see in the Colonial documents. As we begin our module focused on counting, I am learning how to count with higher numbers in Zapotec and I share this knowledge through Twitter, see Figure 3.

Figure 3. Sharing what I’m learning about Zapotec numbers on Twitter

As we resort more and more to Spanish over time, we keep losing words that we used to use in our pueblos. In my pueblo, I notice a big difference between my generation and the younger generation. The usage of more Spanish words is particularly reflected when counting and many people resort to Spanish to count higher than twenty.  In this Conversatorio we also talk about these types of challenges. We are learning more about our language, including how to count using only Zapotec—but how do we promote our languages more in our communities, as there is little support for this type of activism? While all of us enjoy learning, we are learning so that we can have an impact in our pueblos. For us, these go hand in hand.